Predicting the Best Games Of The Week

There is some quality Big Sky action this week as always, so let's take a look at best game in the week ahead.

@ Utah 62, Idaho State 54 (12/6)
This won't be a sight for sore eyes, as both teams have struggled this year. Idaho State got their first Division I win on Saturday against North Dakota, while Utah is still looking for theirs. The Utes would be a mediocre Big Sky team, and they might not win a conference game all year. This is a game Idaho State can win if they can hit a few outside shots, but I don't see it happening.

@ BYU 77, Weber State 73 (12/7)
Damian Lillard is fresh off scoring 41 points against San Jose State, but the Wildcats will miss senior Kyle Bullinger, who will miss the first start of his career after injuring his elbow. Weber State doesn't have a natural fit to replace him, and there is some worry that they have become a little dependent on Lillard for scoring. Hopefully Scott Bamforth can get free for some good looks. I would pick Weber if Bullinger was healthy, but this is tough for the first game without him. 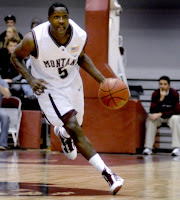 @ Montana 67, Nevada 62 (12/8)
Montana badly needs a win, as they haven't look all that good at 4-4. They will know they have a nice opportunity for a quality win against a pretty good Nevada team. Montana has the talent, but they have not been consistent yet this year. It will be interesting to see how much Wayne Tinkle plays guys like Keron DeShields and Kevin Henderson (more talent and athletic but less experienced) compared to guys like Shawn Stockton and Jordan Wood (less talented but more experience).

@ Weber State 75, Southern Utah 62 (12/10)
This will be a Big Sky game next season, but the Thunderbirds are not at the caliber of Weber State. They are 4-4 on the year, but their best win is against UC Davis. Damian Lillard should have another big day. Opponents are shooting 56% from 2-point range against Southern Utah, meaning Lillard should be able to get to the rim. Look for big man Kyle Tresnak to continue his ascent to being one of the better bigs in the Big Sky.

@ Montana State 69, UC Riverside 64 (12/11)
Brad Huse's biggest concern with all of the newcomers was how they would mesh defensively, and so far his concerns have come to fruition. The Bobcats have not been very good defensively. Fortunately, they've been pretty solid offensively, led by PG Rod Singleton, who has been a leader for them. Christian Moon has also been really solid, as he knows his role and plays it very well. His ORtg is excellent, thanks to a nice outside touch and an ability to take care of the basketball.

Eastern Washington 71, @ Cal State Fullerton 70 (12/11)
Eastern Washington has been really good this year because they take care of the ball offensively, and force turnovers defensively. On the other hand, Cal State Fullerton has been one of the worst teams in the country at taking care of the basketball. Sometimes it's that simple. EWU needs to shoot the three ball, but if they can knock a few down they could get this road win.