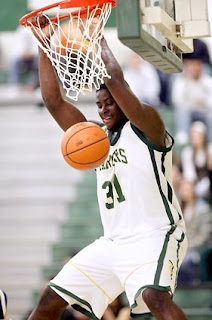 If there is one guy you may not know yet, but could be a big factor in the Big Sky race this year, it is Renado Parker. Parker is a transfer that has become eligible now that the first semester is over, and he could be a huge boost off the bench for a Portland State team that is not very deep.

Here is what Coach Tyler Geving had to say about him before the season:

“Renado has done a great job in early season workouts. When you get him the ball on the block, even though he is only 6-5 or 6-6, he is as good as anyone getting the ball in the basket.”

He played two solid seasons at community college, and then went to Idaho. He was in the Vandals program for one semester, and may have been the most talented recruit for Idaho. He decided to move on, and has found a home at Portland State now that he has become eligible. An article from his high school days talks about his talent then, though he had some academic issues (which is likely why he went the JUCO route).

In his sophomore season, he averaged about 14 points and 6 rebounds from the floor, showing an efficient low-post game. He showed all of that talent in his first game back for the Vikings. In 23 minutes, he has 12 points (on 5/6 shooting) and 8 rebounds (including 4 offensive). Teams would take that level of production from their starters, let alone their third big. The key will be whether he can play defense, and that is a huge area of need for the Vikings.

For a team that already has potential All-Conference players in Chehales Tapscott and Nate Lozeau but little depth behind them. That should change now, as Parker is in the mold of Tapscott. He is undersized but he simply gets it done, and should put up nice numbers at the Big Sky level. His production and continued development could be a big factor in whether or not Portland State is a player in the Big Sky.