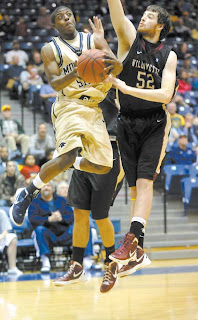 The Bobcats were in control for most of the game, beating Northern Colorado 84-72 on Saturday night. The win improves MSU to an impressive 5-2 in the Big Sky, in sole possession of third place. For UNC, the loss of both games on the Montana roadtrip drops them to 3-4, as well as being a bit disheartening that they weren't all that close to winning either game.

Montana State may still be finding themselves, but they have to be happy with what they are finding.

Montana State head coach Brad Huse still describes his team as one that's finding itself. If nothing else, the last three games have taught the Bobcats they're pretty good at counter-punching.

MSU shook off two Northern Colorado runs - one in the first half, one in the second - and countered UNC's 52 percent shooting effort from the field by hitting 13 3-pointers in an 84-72 victory at Worthington Arena Saturday night. The Bobcats (10-8, 5-2) pushed to a homestand sweep and three wins in a row by starting hot and using their bench to provide sparks all game long.

The Bobcats beat the Bears at their own game. UNC came into the game by being the third best three-point shooting team in America, but it was MSU that made 13 treys in this one (and ironically Christian Moon, their best three-point shooter, was just 2/9 from downtown). Freshman Mike Dison was 4/5 from outside and led the team with 17 points, and four other guys were in double figures for MSU. They also took great care of the ball, turning it over just six times in perhaps their most impressive win of the year.

Northern Colorado also shot the ball well, but their old defensive problems cropped up again. Anytime you can shoot over 50% and turn it over only 11 times you have to like your chances, but they simply could not get stops. They had four guys in double figures, but BJ Hill must have been trying everything he could think of to spark the team to play defense. 11 guys played at least five minutes in this game for the Bears.

Montana State will now travel for a roadtrip against Eastern Washington and Portland State. If they can get a split out of that, they will be sitting nicely at 6-3. Northern Colorado goes on a roadtrip to play Idaho State and Northern Arizona, and it is not unreasonable to say they should be disappointed with anything short of a sweep. Improbably, UNC @ Idaho State on Thursday night is a huge game in the Big Sky.