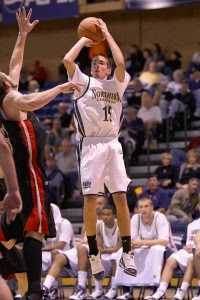 Note: I had the chance to go to this game, and it was definitely a thriller. Thanks to Northern Colorado staff and especially Scott Ward for setting it up for.

This was certainly a strange way to win a ballgame, but Northern Colorado will take it.

With about 10 seconds left, Eastern Washington was up 70-69, with Northern Colorado taking it up the court. UNC head coach BJ Hill was trying to get a timeout, but couldn't get one in time. Tevin Svihovec lost the ball, and Collin Chiverton of Eastern Washington dove on the ball and called timeout.

The only problem was that EWU was out of timeouts.

A technical was called, and Tate Unruh converted a pair of free throws to go ahead 71-70. EWU was unable to score on their last possession, and the Bears got the huge victory.

Reading that, it would seem like Collin Chiverton should be getting a lot of blame for this game, but in truth, it was his offense that really kept them in the game. Despite only playing 18 minutes because of an injured foot, he scored 21 points and hit the go-ahead leaner with 18 seconds left. Coach Jim Hayford made offense/defense subs all second half, which really showed how he was having trouble with his foot. His jumper was on all game long, and that kept this thing close.

The key to the game was the matchup between Cliff Colimon and Elliott Lloyd. Colimon was held to just 3 points on 1/10 shooting. When I asked Hill about that after the game, he said that was the work of Elliott Lloyd, who "took on a challenge and did a tremendous job." He won't get as much credit as some other guys when you look at the box score, but he was integral in this win. The casual fan might not note his role, but I am sure the coaches are well aware of what he did.

The other key was free throws. I have been saying for awhile that EWU's Achilles heel is that they send opponents to the stripe too much, and UNC took 40 attempts from there last night. While they struggled early, they hit them late, and that was enormous down the stretch. They finished 25/40 from the line.

The win moves UNC to 3-2 in the Big Sky, while EWU falls to 3-3. I will have more notes on this game in the coming days, but wanted to get this article up. It was a great game that was tight the whole way, and really a game that both teams can build on.