As mentioned, I had a friend visiting which is why there was a huge lack of posts this weekend. However, I did enjoy a great Colorado weekend! Here is a quick look at what I missed in the Big Sky.

The big game of the weekend, biggest game of the Big Sky season so far and one of the bigger mid-major matchups so far, was obviously the matchup between Montana and Weber State. It is not a shock that Weber State won, as they were favored and were at home. However, it was certainly a surprise that they won so handily, with the final of 80-64.

Also surprising was that Weber State put up 49 first half points against the best defense in the Big Sky, and that they did it on a night when Damian Lillard was just 4/15 from the field. Now, Lillard certainly contributed with 11/12 FTs, five rebounds, and four assists, but the big story was that a lot of other guys stepped up for the Wildcats.

Scott Bamforth had 15 points and knocked down three treys. Kyle Tresnak had five. Five other guys scored between five and eight points, and that's not even counting leader Kyle Bullinger, who is just returning from injury. Weber State has been winning games with guys hurt and without a ton of guys stepping up to help Lillard... now that they are getting guys healthy and they are getting everyone involved, they are going to be extremely difficult to beat.

Montana obviously struggled defensively, but they also were not able to get in a real good offensive flow. They shot 38.5% from the field, and only two guys (Will Cherry and Kareem Jamar) were in double figures. For a team that had to be going into this game thinking it was one they could go in and steal, it had to be a very disappointing effort.

The two teams will meet again on February 28th in Missoula in their final conference games of the year. It would be great theater if they can go into the game gunning for the Big Sky regular season title (which matters a heck of a lot in this conference), but as it stands right now Weber State is the clear favorite. 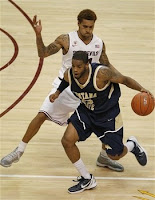 Another big game on Saturday night was played between Montana State and Northern Arizona, with the Bobcats needing to go on the road and get another road win. It wasn't easy, but they did just that, beating the Lumberjacks 74-72 in Flagstaff. Northern Arizona trailed by 14 with 11:02 left, but battled back to take a 72-70 lead with 2:23 left, but MSU held them scoreless the rest of the way. Xavier Blount made lots of big plays all day and especially down the stretch, showcasing his superb talent.

Montana State has an excellent trio of wings, and they showed it in this game. Blount led the way with 21 points (on 11 shots), Christian Moon had 12 points, and Shawn Reid finished with 16. They are three solid players that need to play big for MSU, and they did on the road here.

NAU rebounded well and got to the line often, but they just didn't hit enough shots to win this game. They were 3/15 from downtown, and shot 40.7% overall.

MSU improves to 3-2 in the Big Sky, while Northern Arizona falls to 1-5. The Bobcats have a nice win over Portland State (and road wins over Idaho State and Northern Arizona), but I don't see them as a top 4 team in the Big Sky at this moment, despite their solid record. Time will tell. Three conference wins at this stage is huge.

I did write about this game this weekend, but in case you missed it, Northern Colorado won a thriller over Eastern Washington Saturday night in Greeley. It was a back and forth game that was a blast to be at, and could probably be called the best conference game in the Big Sky so far this season. Both teams went back and forth all day and made plays.

In the final game of the day, Sacramento State found a shocking way to lose, as Idaho State incredibly came back to win in Sacramento, 68-67.

The Hornets led by 22(!) points with 11:21 to go, and ISU had amassed 32 points in the first 28 minutes, 39 seconds. In the last 11:21, they scored 36 points. I will admit, I was following the game online a bit, and I turned the computer off and assumed that Sacramento State got the win. To call the comeback shocking does not do it justice.

Check out Ken Pomeroy's win probability chart for this game. You won't find a lot of games like that. Sacramento State led by 22 with 11:21 left, 10 with 1:58 left, and 3 with 12 seconds left. Then Kenny McGowen went to work.

The Idaho State men's basketball team rallied from 22 points down in the second half to beat Sacramento State 68-67 at the Hornets Nets in Sacramento, Calif. Idaho State trailed 67-64 with 12 seconds remaining when Kenny McGowen hit a 3-pointer and was fouled with eight seconds left. McGowen connected on the free throw and the Hornets last second 3-pointer was blocked by Sherrod Baldwin to give the Bengals the victory.

Congrats to the Bengals for an incredible comeback win to improve to 2-3. Sacramento State falls to 0-5 in the Big Sky, and their deep hole is a little bit deeper, especially after a game that has to be more than a little bit of a confidence killer.

What did I miss from the weekend?