The Play of Tim Huskisson 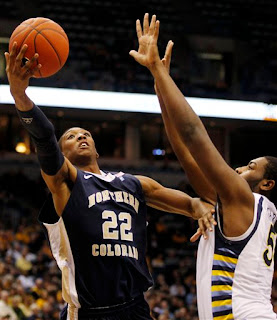 I have been very impressed all year with the play of Northern Colorado freshman Tim Huskisson, and that belief in his potential was just reinforced watching him in person on Saturday night.

Looking at his numbers, nothing stuck out a ton, but he was just solid in many ways, and contributes a lot for a freshman. He scored eight points on 3/6 shooting, had three rebounds, and two steals. It was a quietly efficient game, but showcased his skills.

One, he is a solid shooter and efficient offensive player. He is shooting over 50% from downtown this year (albeit he does not have a ton of attempts), but picks his spots. In the EWU game, he hit a couple huge threes late in the game, which kept the Bears right in the game. He is shooting 54.3% from the field this year, 52.6% from threes, and 87.9% from the stripe.

He also contributes with his excellent athleticism. He is not an amazing athlete, but he is a very good one for the Big Sky. He posts solid rebounding numbers, and gets some steals and blocks. He has the ability to guard athletic guys, which is a big trait for the Bears with their roster makeup.

Huskisson is a guy that only plays 15.8 minutes per game as a freshman, and averages 7.2 PPG. But he is a guy that brings a lot of different attributes to the table, and doesn't really take anything off of it. With his talent, he will at the very least be a very good player for the Bears for the next few years, with the potential to grow into an all-conference guy.