With Bracket Buster selections happening on January 30th, there has been more and more talk about who teams might play. I am no more in the know than anyone else, but thought it might be fun to speculate on what the matchups involving Big Sky teams might be.

UC Santa Barbara @ Montana
Both teams have had their moments nationally over the past few years. Montana has played in the NCAA Tournament and had a well publicized win over UCLA last year, while UCSB has a great player in Orlando Johnson and has been a contender in the Big West for the last few years. Both teams have a chance to win their conference this year.
Last year: Montana played at Long Beach State

UC Davis @ Northern Arizona
UC Davis has struggled all year to get wins, as they have just one on the year. For NAU, they had a good stretch of games, but other than that they have played just as poorly as UC Davis. This would be a competitive game between two teams that desperately need some good things to happen to them this year.
Last year: Northern Arizona played at Cal Poly 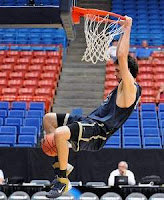 Southern Utah @ Northern Colorado
This would be an early preview for next year, as Southern Utah gets prepared to join the Big Sky Conference. UNC has been inconsistent so far this year, but they are a good team at home. The Thunderbirds are currently .500 overall and in conference play, and matching their experience against the Bears' inexperience would make for a compelling game.
Last year: Northern Colorado played at New Mexico State

San Jose State @ Sacramento State
Both teams got some wins in non-conference play, and looked like they might contend for at least .500 in their conference. That hasn't happened, as they have both struggled big-time once the games mattered. The fact that they both play in the same state makes this one a logical choice.
Last year: Sacramento State played at SE Missouri

Eastern Washington @Cal Poly
The Mustangs are a solid team - they have beaten USC, Fresno State and Cal State Fullerton this year, but the bigger story has been their close losses. They lost to St. Mary's by 5, DePaul by 5, UC Santa Barbara by 1, and Long Beach State twice (by 5 and 9). Eastern Washington is similar in that they have been close to getting the big win, but haven't quite gotten over the hump, with tight losses to Gonzaga, Oregon, Montana, and Weber State. Each team needs this chance to get a win over a quality opponent.
Last year: Eastern Washington hosted Cal-State Northridge

Idaho State @ Cal-State Northridge
The Bengals are on a little bit of a nice streak, but on paper this would be a competitive ballgame. CSN likes to play fast, but they don't exactly do it all that well. ISU is probably a little bit better thanks to Chase Grabau, but this would be a nice road win if they could get it.
Last year: Idaho State hosted Cal-State Fullerton

Montana State @ Utah State
Utah State is having a down year, but they are still a high profile team thanks to their success over the past few years. Meanwhile, Montana State is on a tear, at 5-2 in the conference. While Utah State fans might think their team should get a higher profile opponent, all evidence suggests this would be a really good game.

Portland State @ Idaho
Both teams are near the middle of their conference, with aspirations to go higher. Idaho has played a couple of Big Sky squads this year, losing to Montana and Eastern Washington. If Portland State can get a couple wins this week, they have a chance to get an even higher profile opponent, but Idaho looks like it would be a good matchup. Also, geography triumphs, as this game simply makes sense.
Last year: Portland State hosted Loyola Marymount

Your thoughts? What matchups would you like to see?

EDIT: My original post had San Jose State against Sacramento State, and UC Davis at Northern Arizona. Then, later, I switched this around, so UC Davis traveled to Sacramento State and SJ State took on NAU. Then, a commenter and tweeter reminded me the error of my ways, and I why I had the original matchups that I did  - because UC Davis and Sacramento State play every year! Thanks to those guys for pointing out my error, and I have fixed my prediction.