It wasn't always pretty, but UNC doesn't care about getting style points when it comes to road victories in the Big Sky Conference.

In a tight, back and forth game, Northern Colorado prevailed for a big win, beating Northern Arizona 64-62 in OT.

UNC led 54-45 with 3:49 to go, when the Lumberjacks went on an 11-0 run, taking the lead with 20ish seconds left. After a Stallon Saldivar missed FT, Tevin Svihovec went the length of the court to make one in the lane, tying it up. James Douglas committed and offensive foul, and Svihovec was blocked by Durrell Norman to send the game to an extra session.

This was the story at the end of overtime:

In overtime, the teams exchanged the lead five times before Svihovec put the Bears up by one with a layup. NAU had two chances to tie the game or win in the final 10 seconds. Saldivar missed a jumper in the lane with seven seconds left and UNC's Mike Proctor grabbed the rebound. Tim Huskisson hit the first free throw to extend the lead to two points but missed the second, giving NAU a final chance. James Douglas' jumper from the right side was off the mark as time expired.

A few takeaways from this game:

- About a month ago, it seemed like Tate Unruh and Paul Garnica were the underclassmen guards that were the future of UNC's backcourt. But suddenly, a new contender has emerged. Tevin Svihovec scored 30 against Idaho State, and had another important game for them. He only had 11 points on 5/13 shooting, but he made big shots for them. He made the running layup near the end of regulation to give send it to overtime, and he hit the go-ahead basket. He is an excellent outside shooter and crafty, efficient offensive player. His star is bright. I am hoping to write a bit more about him in the next couple weeks. 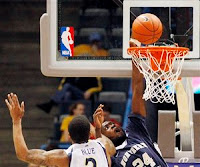 - Another guy that has gotten better and better is Emmanuel Addo. I called him one of the breakout sophomores of the conference before the year started, and he is fulfilling that promise. He scored 28 against ISU, and last night threw in 17 points and 5 rebounds, and doing it very efficiently. He is a guy that looks to score around the basket, and does it well. There are not a lot of big men athletes like Addo in the Big Sky, and UNC has to be very excited about his future.

- I would be remiss if I didn't mention Tate Unruh finding his stroke again, draining four threes.

- James Douglas showed why he has supplanted Gabe Rogers as the go-to guy in Flagstaff. He played all 40 minutes, and had 22 points, 6 rebounds, and 5 assists. He showed some nice athleticism and the ability to get to the basket.

- With Northern Arizona trailing by 1 in overtime, they had the ball at midcourt with 25 seconds left. I thought they might give it to Stallon Saldivar, so he could create for somebody else (8 assists on the night). Instead, he took it himself, and missed a runner in the lane. Did not really like that call, because that is not his game. I would rather have seen the ball go to Douglas to see if he could create something.

What is everyone else's impressions of the game?