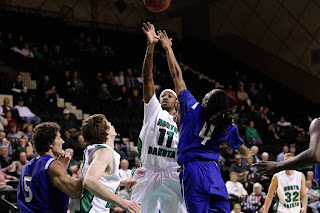 Idaho State traveled to Grand Forks to take on the University of North Dakota on Tuesday night, and the future Big Sky member had their way with the current Big Sky member. The Fighting Sioux won 63-47 in a defensive battle.

Aaron Anderson led the Sioux with 17 points, including getting to the line for 9 FT attempts. Jamal Webb, a guy I believe has the potential to be one of the best mid-major PGs in America, contribued 15 points, 6 rebounds, and 6 assists. It was a night when UND's most talented player, Troy Huff, contributed just 8 points, but the rest of the team was more than able to pick up the slack.

For the Bengals, it was an ugly performance. They shot 36% from the field, 14/27 from the foul line, and made just three 3-pointers. For the second straight game Melvin Morgan did not play well, this time going scoreless in 11 minutes. Jakub Kusmieruk was their best player when he was on the floor (as he should have been - UND does not have a strong or deep front line), but he only played 23 minutes.

For Joe O'Brien and the Bengals, the near upset of Oklahoma suddenly seems very far away.