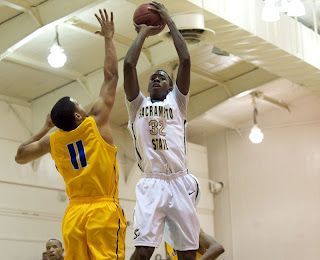 The Sacramento Bee has an article on the Hornets and some optimism heading into the season, fueled by some returning experience and a light non-conference schedule.

"I like our group," he said. "We have some experience. We haven't really had any since I've been here. We have nine guys back who clearly know what they're doing, and I think the four guys we brought in are basketball-bright."

The shocking part of the article is that Sacramento State hasn't had a winning season since 1988-89, when they were in Division II! It would be quite a feat if they can get to the .500 mark.

They begin the year with this stretch - Menlo, Central Arkansas, @ Washington State, @ UC Davis, McNeese State, @ Col Poly. If they are going to be a decent ballclub this year, 4-5 out of that stretch is necessary. Brian Katz finally has a team of all of his guys, and he seems to be excited about it. Their drive for .500 begins tomorrow with what should be a gimme.