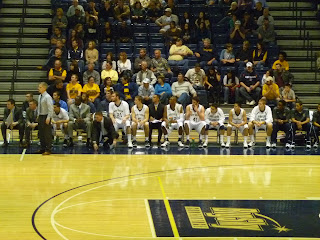 I had the chance to attend the game between New Mexico State and Northern Colorado on Saturday, a fast paced game won by the Aggies 89-75. Some thoughts and observations from the game.

- Paul Garnica looked good, as he was 6/10 for 14 points. He drained a couple of 3s which was impressive... if he can knock those down consistently he will be the Bears best player. Garnica is also the best on the team at getting to the basket, he really had some nice drives. In addition, he has quick hands defensively, and wound up with 2 steals (though they were in part due to someone else deflecting the ball. I did think he struggled a bit with the press, as did the whole team.

- The biggest key to the game was the athleticism of New Mexico State. They are one of the top teams in the WAC, and they showed it. They put on a press all night, and forced UNC into 20 turnovers. Their athleticism also allowed them to be the aggressor, which is why they got 41 free throws compared to 15 for the Bears. They forced UNC to play too fast, and it caused them to take some quick shots. In the first half, Northern Colorado was lethal from downtown, and that kept them in it, but they cooled off a bit in the second half.

- Tate Unruh had an impressive game, finishing with 15 points, 3 assists, and 3 steals. He has a quick, pure release, and he will drain a lot of treys this year. He is also a good passer, and made some nice decisions passing the ball in this game. His handle is decent. He seemed to really favor going to the right, and will need to work on his left hand. Unruh and Garnica were the two Bears that most impressed me.

- I was a little surprised to see true freshman Tim Huskisson get the start, but he handled himself well. His stat line didn't stand out - 5 points, 3 rebounds, 2 assists, but his athleticism was apparent. On a team without a lot of great athletes, Huskisson will be a nice piece. Another recruit, Aaron Hawk-Harris, is a guy that they said brings intangibles and toughness, and I liked what I saw from him. He is a solid defender and does enough offensively that he is not a liability. Another guard Tevin Svihovec was solid but didn't stand out. He is a solid shooter and is fundamentally sound, but didn't really make a big impact.

- The frontcourt has some nice pieces, but nobody really stepped up in a big way. Connor Osborne looked the best to me, as he had 8 points and 7 rebounds in 23 minutes (and a couple thunderous dunks), but he still looks like he is getting into playing shape. I like his skillset a lot though. Mike Proctor played decent defensively and deflected a couple of balls, but tried to do a little too much with a couple things offensively. On the glass, he only had 3 rebounds in 24 minutes. Emmanual Addo is the most athletic of the big men, and you can see his talent as a sophomore. He had 6 points and 5 rebounds in 19 minutes, and showed some good footwork around the basket. I like his future. Brendan Keane got 11 minutes of action, but against an athletic Aggies frontline he looked a bit overmatched. He had 0 rebounds in his time, and you could tell it was his first collegiate game. I have no doubt he will be a fine player, but he did not add much in his first game.

- Once again, photo above taken by my beautiful wife!

Overall, Northern Colorado is definitely a talented team, and they are stocked with shooters. I like their backcourt, and I think their frontcourt will get there. However, after watching them Saturday night, I still like my original preseason analysis - they are a talented team, and they will beat some good teams in the Big Sky this year. But, I do think they are a year away from being true contenders in the Conference, and I see them settling in anywhere from 4th-6th in the Big Sky.

What is everyone else's thoughts? I'd particularly like to hear from the UNC fans that had a chance to watch the game, what did you see?