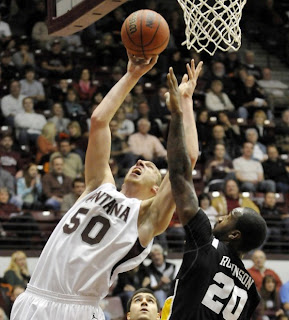 Photo from The Missoulian
I will get to more on the Thanksgiving holiday soon, but for now I just wanted to focus on the biggest game in the Big Sky over the break - Montana beating Long Beach State 73-71 in Missoula.

Long Beach State was a team that was a getting a lot of respect on national blogs like CBS, as well as being ranked #8 in the Mid-Major top 25. However, I knew Montana had the talent to beat them, and they showed it on Saturday night.

The Grizzlies admittedly had no answer for TJ Robinson, but the key was that they slowed down Casper Ware, who had an inefficient 15 points. Ware is the best player in the Big West, and the Griz should be commended for their work on him. It was a team effort too, as Will Cherry was plagued by some foul trouble and was only able to play 27 minutes (though Cherry did score 13 points, all in the second half).

The biggest key other than defense on Ware was that the big guys stepped up. Here are the lines for the four bigs:

Anytime Montana can get 36 points and 18 rebounds from their PF/C spots, they are going to be extremely difficult to beat. It was a very encouraging effort from all those guys.

Of course, Montana is still not getting much respect for the win (probably in part because they lost at North Dakota on Wednesday -- but a lot of teams are going to lose to UND this year, they have a really solid team). From CBS:

Long Beach State has its opportunities against big boys, but it can't blow the games like it did against Montana, falling 73-71. Louisville is next.

No talk on how the Grizzlies forced Casper Ware into 4/12 shooting with their typical stifling defense, but talk of the 49ers "blowing the game." As if the Big Sky needed more locker room material, that certainly works.

Huge win for Montana and the Big Sky as a whole.