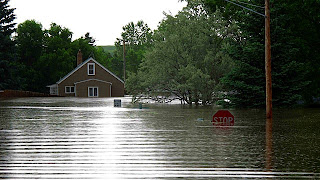 My home state of North Dakota was rocked hard by flooding this past spring, and none of those towns was hit harder than Minot. Just take a look at the town paper website, and you can read about some of the destruction.

So it was nice to read that the University of North Dakota took on Minot State in an exhibition to benefit flood victims.

University of North Dakota guard Aaron Anderson's senses were bombarded Saturday when he assisted with cleaning up a Minot resident's home and witnessed first hand the aftermath of the flood.

Anderson saw "broken walls" and "water damage" everywhere when he entered the home and was left near speechless while viewing the devastation. Anderson could only articulate by saying it was "crazy."

"All the pictures you see on the Internet does it no justice," Jones said. "It just shows you the sheer power of what water can do. It looked like a war zone. Everything was just barren and battered with the 'I am coming back signs' still remaining in the home."

If you are compelled and looking for a charity to donate to, I know the Minot Red Cross could certainly use all the help people are willing to provide.