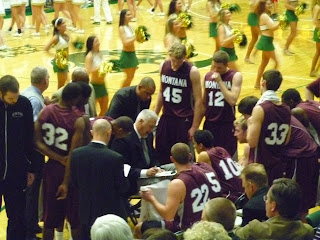 I made the trek up to Ft. Collins on Friday night to watch Montana take on Colorado State, and was treated to a defensive slugfest. The Grizzlies shot 41% from the field, the Rams shot 40%, and neither team was in sync offensively (no doubt with help from the opposing defenses). Here are some of the notes from the game that I jotted down.

- The biggest factor in the game was the huge rebounding disparity. CSU outrebounded the Griz 43-24, including 11 offensive rebounds to 3. The biggest of the game was with about 35 seconds left. CSU was up 3 with the ball, and the shot clock was winding down. They had to force a shot, and because of a switch Will Cherry was stuck trying to box out Pierce Hornung (who finished with 12 rebounds), and Hornung rebounded the miss, and that was essentially the ballgame. At the end of the ballgame, the Griz lineup looked like: Cherry-Stockton-Jamar-Steward-Weisner.

- Of the big guys we talked about stepping in, Mathias Ward probably had the best game. He was 4/5 from the field and displayed good range on his jumpshot out to 18 feet. However, I suspect he was on the bench in crunch time because he only had 1 rebound in 20 minutes. Eric Hutchison was solid defensively in his 22 minutes of action, with 5 rebounds and 2 blocks. He is not very skilled offensively, but he did use his body well to get a couple easy buckets. Billy Reader his a nice jump hook on the block early in the first half, but then essentially disappeared the rest of the game. He strangely is not appearing the box score that I got, but he definitely played (trust me!). He was simply not a factor. 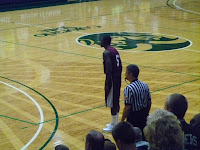 - Will Cherry definitely still is inconsistent on his jump shot, which I thought was the biggest thing he needed to work on. He was 1/5 from beyond the arc, and all were good looks. He did hit a big 3 midway through the 2nd half, but missed an open one with the Griz down 59-56 with 2 minutes to play. He struggled a bit with his midrange jumper as well, as he missed a couple of good looks. I suspect that will come in time. He played almost the whole game and drew a tough defensive assignment, so I'm not sure if fatigue was a factor at all. He was assertive at the end of the game, and got to the foul line a couple times late to keep the game tight. I believe his first rest came with about 10 minutes left to play in the second half, and his absence was felt immediately. With Montana down 48-39, he sat on the bench and Montana immediately turned it over before they even got in their set. On the other end, Jesse Carr hit an open 3, and all of a sudden it was 51-39.

- Art Steward and Kareem Jamar were both plagued with first half foul trouble, and that was a big factor. Montana struggled to get good looks without them in there, and the lack of Derek Selvig was definitely felt. They weren't able to get open shots, and it didn't seem like anyone other than Cherry was able to get a shot for himself or for a teammate. It almost seemed at times like the offense was running through Shawn Stockton.

- Kareem Jamar played an excellent second half, and he is a guy that can create shots. He is athletic, and good range on his jumper, and gets down low and battles for rebounds. They also effectively got him the ball on the block, and he showed an ability to score on smaller defenders down there. He was the best on the team last night at getting his own shot. He finished 5/10 with 12 points, and also had 5 rebounds and 3 assists.

- Two guys hit big 3s. With Montana down 30-20, Michael Weisner hit a big 3 to make it 30-23 going into the break, which had to be a nice lift (CSU coach Tim Miles said after the game... "33 hit a big shot at the end of the half... I don't even know his name"). Near the end of the game, Art Steward his a huge 3 to cut the lead to 58-56, and it looked like the Griz had momentum. Unfortunately, Wes Eikmeier responded with an NBA range 3 on the next possession, and Montana would never cut it to 2 again.

- Of the freshman, Kevin Henderson was the first to see action. He played two minutes but had little to no impact. Jordan Gregory played 6 minutes but also was unable to provide any type of spark. Keron DeShields did not play, but he was the guy that is always trying to sit closer to the coach on the bench to get noticed. It didn't work in this game, but I liked his attitude!

- The above photo of Coach Tinkle in the huddle talking to the guys was snapped by my lovely wife! Selvig was off to the left in the black sweatsuit. He was walking gingerly but his limp from the sprain was not too bad.

All in all, it is a disappointing loss but not a bad loss. I think it is definitely a game Montana thinks they could have won, but they were definitely impacted by the loss of Selvig, both in rebounding and in creating some shots for teammates. Miles said that Montana, "Came in a man down and really did a great job," but the Griz won't be taking a moral victory here. They had a chance to win a game on the road against a quality opponent and just came up a little bit short.