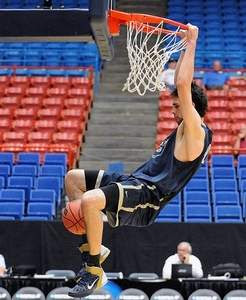 Northern Colorado took on D2 Chadron State on Tuesday night, winning 89-65 through one good half and one bad half. The first half ended 44-19, while Chadron outscored UNC 46-45 in the second half. Chadron scored 34 of their 65 points from the FT line.

Mike Proctor was the best player for the Bears in this one, as he scored 14 points, had 6 rebounds, and blocked 2 shots in 21 minutes. He is the most experienced post man returning, and he will need to have a productive year for them. Another big man I am high on is Emmanuel Addo, who had 2 points and 4 rebounds, but finished 0/7 from the FT line. He was a 68% FT shooter last year, so I am not sure if this was just a fluky day.

One promising development has to be redshirt freshman Tevin Svihovec (get used to spelling his name), as he had 8 points, 5 rebounds, and 4 assists in 19 minutes. He was an efficient 3 of 4 from the field. I have been hearing good things about him, and judging from this game he will have a key role on this team. To update a couple other sophomore guards expected to have increased roles, Tate Unruh had 9 points (and hit a three-pointer), while Paul Garnica had 8 points, 3 assists, and 2 steals, but also turned it over 5 times and shot 3

Ultimately, there is probably not a ton to be gleaned from an exhibition game against a D2 opponent, but it is good to be looking at box scores again. The season is getting closer and closer!