The Importance of Jakub Kusmieruk For Idaho State 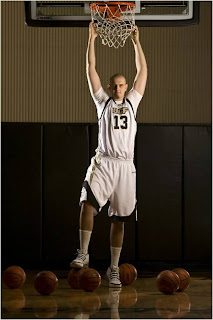 He will be the tallest player in the Big Sky next season, and how good he is will have a huge impact on Joe O'Brien's coaching prospects. And I am guessing that most Big Sky fans have no idea who he is (before this post).

His name is Jakub Kusmieruk, and he is a 7'4'' big man that will be suiting up for Idaho State after sitting out last season. He played his first two years at Central Florida before transferring to Pocatello.

In his two seasons in Conference USA, he did not do a ton. In his last season there, he scored 1.8 PPG and pulled down 1.3 RPG in 6 minutes per game. Probably all you need to know about his time there is that in the one paragraph blurb about his time there on Idaho State's website, this appears:

in four minutes in the home win over Rice, scored three points and blocked a shot

If that is one of the highlights of his two years, he did not make a big impact. But no matter, reports about him are good and Coach O'Brien is high on his prospects. O'Brien says:

There's nothing gimmicky about Kusmieruk's role on the team. O'Brien believes his mere presence on the floor will command double teams, thus freeing up other players for open looks. And the coach thinks the big guy is pretty effective with the ball in his hands, too. Conditioning should not be a problem, either; Kusmierek has slimmed down considerably since arriving at Idaho State last year weighing 315 pounds.

"He's down to about 257 now," O'Brien said during a late August interview. "If we can keep him on the court something pretty close to 25 minutes a night, I think that's going to be huge for us."

At 7'4'', it's hard not to think that he could have a big impact on games if he can stay out of foul trouble and stay conditioned well. Defensively, he will certainly make teams think twice about taking it to the rim. Plus, it is not hard to imagine him and Abner Moreira being one of the best rebounding duos in the Conference.

Offensively, we will have to wait and see. If he really has enough skill to draw double teams, that will create some room for Idaho State shooters, which will be a huge boost to the offense (Idaho State was not a good outside shooting team last year). If Kusmieruk can become one of the better posts in the Big Sky, then maybe (just maybe) Idaho State will have a chance to be playing in the Big Sky Tournament.