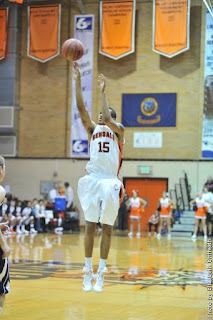 Picture from Idaho State website.
Northern Arizona and Idaho State had a couple of easy ones on Friday, and thankfully they went out and took care of business in games they should have and did dominate.

The Lumberjacks got their first win against Arizona Christian, winning 103-42. The game was never in doubt, as the Lumberjacks took a 27 point lead into halftime and dominated the second half even more. It is not a game that will boost any resumes or look impressive, but sometimes it is good to just get that first win and to experience playing well to boost confidence. Five players posted double figures, including Stallon Saldivar (with a career-high 17 points and 9 assists) and freshman James Douglas (with 18 points).

They should have another easy win on Tuesday as they take on Northern New Mexico, an NAIA team that has been throttled by both Weber State and Montana State this season.

Meanwhile, Idaho State took out Colorado Christian 93-66, though it was only a 9 point game at halftime. The Bengals had 6 guys in double figures, led by 16 points from Andre' Hatchett. It was a very nice offensive performance, but Coach O'Brien wasn't super pleased with the first half defense:

“The first six minutes we played like we had been practicing and played with a lot of intensity on the defensive end of the floor,” O'Brien said. “That resulted in some running and easy shot opportunities. They were really frustrated with what they were going to do offensively. They were having a hard time handling Chase, Kenny and Andre's pressure. The last 12 minutes of the half we backed off defensively and started lining up between the ball and the rim. All we did was give up lay ups and commit fouls.”

Still, they figured it out in the second half and coasted for an easy victory. The win improves them to 1-2.